Arquillian is a Java EE testing platform that performs testing for java classes on containers. Liferay DXP / 7 offers Arquillian Liferay extension that can be used to test Liferay plugins along with their OSGI components. In this blog, we will see how we can write and execute Integration test using this extension in Liferay.

For more Information on Arquillian, you can refer http://arquillian.org.

Lets start with creating Liferay Portlet Skeleton. You may use blade command line (If it is installed on system) or using LR IDE.

Create a package under src/main/java for service related classes. Don’t miss to create folders for test classes and resources under src folder. You can refer a sample structure below.

Define OSGi service interface and its Implementation class inside a package created for service classes.

Next, we will see how Arquillian Liferay extension injects implementing class object using @Inject annotation and performs a test on container at run time. 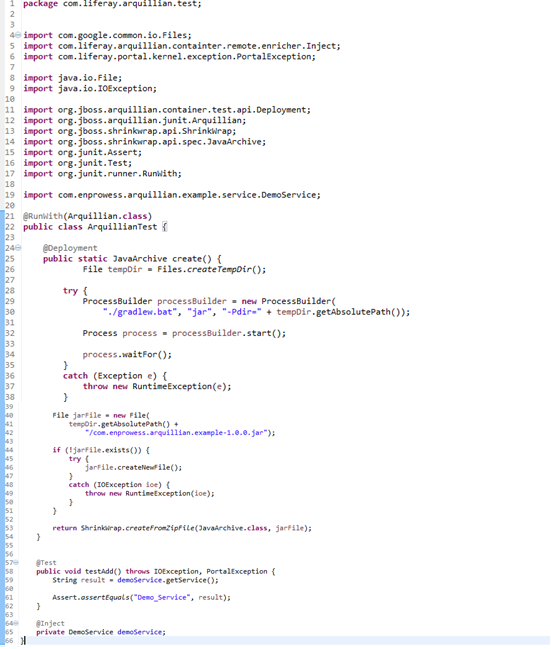 In ArquillianTest.java class, @RunWith(Arquillian.class) is a JUnit annotation that asks Arquillian to execute test.

Method testAdd() is a test method marked with @Test, that calls getService() method on “demoService” object and checks for assertion.

Note: ’demoService’ variable gets populated with implementation object of DemoService.java interface (DemoServiceImpl.java in our case).

@Deployment must be annotated to a ‘public static’ method that returns a test archive file (i.e create method above).

For more on ShrinkWrap – http://jboss.org/shrinkwrap.

Name of test archive file is identical to ‘Bundle-SymbolicName’ in bnd.bnd.

Set dependencies as below inside plugin’s build.gradle file.

Before deploying jar files on container, Arquillian exports test archive file (in this case it is com.enprowess.arquillian.example-1.0.0.jar)  on this path. This file contains all the test related files that can be used for a reference.

One can Install them from Apache Felix gogo shell or by setting gradle tasks in build.gradle as follows.

For more Information on installing these dependencies, one can refer https://dev.liferay.com/develop/tutorials/-/knowledge_base/7-0/arquillian-integration-test-example

Now, Let’s configure Jacoco which is a code coverage library for java. For more information on jacoco, please visit http://www.eclemma.org/jacoco/

Or, by configuring setUptestableTocat task in build.gradle as under. 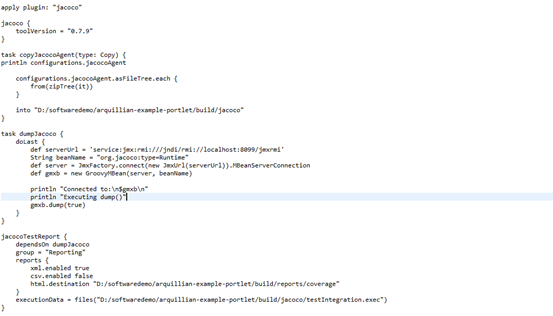 Finally, Configure Liferay server on which Arquillian need to execute tests and put import statements for the classes,

You can set tomcat startup time as below.

Open a terminal to project root path and execute command as shown under:

You can set tomcat startup time

It should take few minutes to execute, since it starts liferay tomcat first and runs arquillian test after. It automatically stops tomcat after execution of test.

After successful execution, success message will look like below,

You can see result on following path,

Hope this is useful.