Quick summary: This article will discuss the best angular practices we should follow while developing the client-side project using the angular framework. When developers focus on some rules and recommendations in Angular, they can create the best application.

It has been designed to reduce the limitations of other JavaScript frameworks, which is why Angular is one of the most powerful framework for building web applications with optimized speed and performance.

Today, over 40% of frontend developers are using Angular for web apps. Because of its widespread popularity, we thought it would be a productive activity to high spot a few Angular best practices with you.

Without further delay, let’s list some of the Angular best practices we follow to build web applications.

Angular Best Practices you should follow to organize your Angular project

Angular has progressed to become one of the most demanding frameworks in JavaScript-based web applications. It has quite a lot of out-of-the-box features that help in building web apps with clean-code architecture.

This practice involves keeping the code readable at most places, having a clean code structure for effortless management and maintenance, writing small functions, and maintaining reliable and related naming to the file names.

Here are some Angular best coding practices you should follow to develop your Angular application with the proper coding standard.

A simple but important thing we should follow is Creating an Angular Project structure. It gives a clear idea of all the components that exist in your application.

You can have trouble managing the whole application if you have not correctly structured your project.

Whether the size of the project is medium or large, you should always try to have the habit of structuring your angular project.

Among all mentioned best practices, creating a folder structure is a critical factor that you should consider before initiating your project. If you haven’t structured the folder properly, there will be a high chance of inviting many problems haunting you throughout your app development.

If you aim to build a scalable angular app, defining a highly scalable folder structure is recommended. Developers should practice shared-module concepts to increase code re-usability since it ultimately saves development time and cost and increases the performance of your angular project. 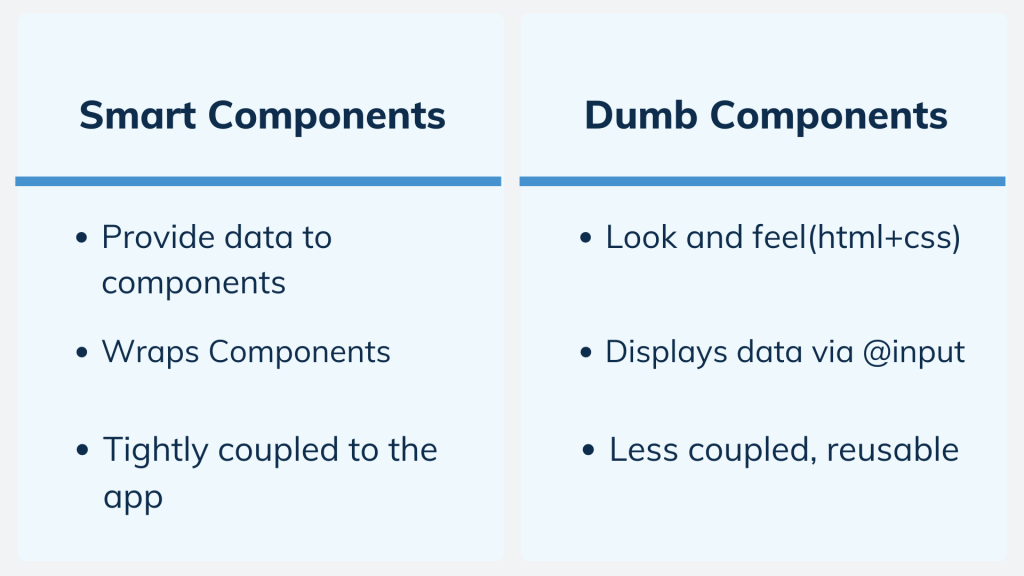 The title may not sound kind enough. In essence, the idea is like this. For any specific feature/page, you may have a smart one and several dumb components in your app.

Smart components do the functionalities like manipulating data, calling the APIs, managing states and focusing more on functionalities. On the other hand, dumb components are all about cosmetics: they focus more on looking.

For example, Let’s have a website with a simple login process that contains an input form and login-in function for the users– The login form has input boxes and buttons.

The dumb components handle the look (UI) of the buttons and text boxes. The smart components run these buttons’ functionality, i.e., after clicking on the submit button, they check user login info and do the login process.

It is critical to decide and structure these components and minor details behind them in any scalable Angular project, but categorizing helps you create more intelligible Angular apps effortlessly, and it also improves user experience.

When dealing with small and medium-sized Angular applications, State management is manageable, but as the size grows, the process becomes pretty complicated and hectic.

So, the answer is – Having all the states of the components in one place is Central State Management. There is no need to divide states among various small components unless there is a requirement for it. By doing these, it makes communication between components very easy.

Several state management libraries, such as NGRX, NGXS, Akita, etc., have different usages, states, and purposes. NGXS could be the preferred one for all of them, as most Angular developers have referred to it as the most usable and straightforward learning tool.

The answer to which one you must prefer altogether depends on your project’s demand, application size, project structure, and technology stack.

If you manage massive applications where you have got some of the components to handle, then redux is the best for you.

But, if you are running small or medium-sized applications, Redux should be prevented. Considering Redux for such applications will cause performance problems and complicate the code more.

It is essential not to create more than one component, service, or directive within a single file. Each file should be responsible for a single functionality. By doing this, we are keeping our files clean, readable, and maintainable.

Observable Memory Leaks are generally detected in almost all frameworks and libraries. Angular additionally has a similar issue—angular Observable in the mainstream actual data. If you are not focused enough, there will be full chances of memory leaks. They are one of the destructive and straightforward issues attacking the application’s security.

Here are some ways suggested that you can use to secure your application:

You can use async pipes and guarantee to stop memory leaks. You must attempt your best to avoid subscribing to observables then binding them with the component.

So, the conclusion is that if the observable technique is not entirely done, the probabilities of memory leaks are possible.

Angular take(1) is an operator. It takes the {value} and lets it not subscribe each time a replacement value is diagnosed. It takes care that you receive data just once. It prevents the leakage of memory with efficiency.

takeUntil is also the operator. It allows viewing the Observable and gets free from the subscriptions once Observable produces the value.  We can conclude that it will secure the Observable from getting leaked.

The most vulnerable part of your web application could be the security. The web applications have proven to be helpless to attacks from different sources, though it is our responsibility to safeguard our data and the code.

So how does Angular handle security?

Well, cross-site scripting (XSS) is one of the most necessary reasons your client-side platform needs protection. These kinds of scripting attacks can pass on to the controls of a page on the client-side, changing the web pages that the users view.

On the other hand, some built-in features can prevent these attacks that the angular framework offers.

Since there’s no assurance that attackers won’t pass malicious code through the property, attribute, or any provided value, Angular considers all the values untrusted by default.

Hence, while using this protective characteristic of Angular, coders should be aware of specific tasks that the framework executes.

The security measures mentioned above are required to keep attackers from feeding in wrong data values to the client-side and sanitizing DOMs, thus developing Angular client-side applications with more vital protection.

Google’s core Angular team keeps their libraries updated with the latest security issues and bug fixes for a safe frontend connection. So, whenever Google releases a new update, the libraries need to be updated every time.

8. Use of Service Workers for the Responsive App

The service workforce makes it more accessible for users to cooperate with web applications.

Service workers allow users to interact with web apps quickly. We can convert our single-page application into progressive web apps (PWA) by adding native features. You can utilize service workers with any version of the Angular framework above five.

Service workers work as a network proxy. They increase/enhance the user experience by allowing users to access and interact with native features of a web application without waiting for internet connectivity.

So, what are the Service Workers for apps?

Lazy Loading Module is one of the best practices offered by Angular. This feature module tells your application to work on the user demand.

It mainly works to decrease start-up time, which results in the easy loading of the application. Thus, the lazy load module in Angular helps developers to load the thing on demand.

For example, when you use it, it loads the components and other things you need and stops other unnecessary files from getting loaded.

Have a look at the following example of the lazy-loading feature module using the loadChildren property:

The Angular router is a fundamental part of your Angular platform. It allows developers to build Single Page Applications with multiple views and enable navigation between these views.

The purpose of routing is to hide or display components as and when the user might need them. It removes frequent trips to the server by making components available upon requirement.

This idea of routing different paths in Angular applications turns around understanding the basics.

First, developers ought to understand the basic concept of adding components and templates into the app, followed by the correct functioning of routes.

The best practices in routing are:

11. Using Angular CLI in the Application

Angular Command-Line Interface (CLI) helps you create, test, scaffold, and deploy the application. It establishes a workspace folder and creates a structure for a web app.

The primary purpose of this is to reduce JavaScript weakness and customize the app development environment.

You can use the Angular CLI tool to create an initial-level structure for the application. You can additionally find multiple modules in one place whereas still adding a variety of modules and features at any time.

More importantly, you can add new developers to the team at any point without any setbacks, and this is the most significant benefit of using Angular CLI in your app development environment.

It’d be a lot easier for new angular developers to understand the folder structure and app flow with Angular command line interface (CLI). Ultimately, it saves your time when it comes to explaining the project to your extended development team.

So instead of manually creating the files and folders, use Angular CLI to generate new components, directives, modules, services, and pipes.

12. Use Async Pipes for Saving the Memory Bytes

Angular comes prepared with various built-in pipes. These attributes are advantageous in tuning the output of any number of inputs provided to it.

Fundamentally, they support the concept of any web application, i.e., receiving  inputs and processing the data, and changing them into a required output.

Angular Developers should use these features in the code for re-usability purposes. They can simplify code architecture by separating complex mathematical processes.

Async Pipes are built-in attributes. They save you an overload of memory bytes when you develop a large-scale application visited by many users. They subscribe to the observable and display the value it has omitted.

Hence, they come in convenient while marking the components for emitted values and automatically unsubscribing from the observable to control the unnecessary memory leakages.

As shown in the example below:

Proper attention is necessary if you desire to make your app popular and delightful. You need to update your knowledge regularly.

Applying these Angular best practices will help you to make your development smooth and help you create an impressive application.

Besides, the practices explained here are not the end. There is more out there, which we need to learn through real life projects. You are most welcome to share with us your thoughts and doubts on the  CONTACT US page.